The University of Edinburgh's Arcadia Nursery has won the top accolade for Best Education Building at the Scottish Design Awards. 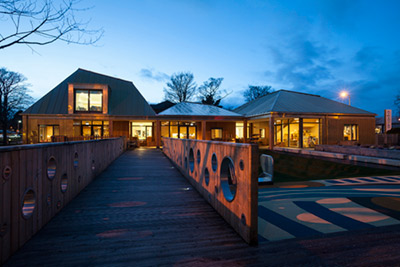 The Scottish Design Awards judges praised Arcadia Nursery as a "holistic response to a kids' building".

The award is the second victory for the Arcadia Nursery this year after it scooped first place for the Wood Award and Commendation for the Building of the Year Award at the Edinburgh Architectural Association Awards, which took place in March.

Arcadia Nursery is part of the University of Edinburgh, based at King's Building Campus and is open to 110 children aged from six weeks to five years. The nursery building brings together two existing nurseries into one purpose built facility, which was officially opened in August 2014.

Designed by Malcolm Fraser Architects, an award-winning architectural practice based in Edinburgh, the nursery comprises three distinct golden pavilions linked by a single story timber building. The innovative structure is built entirely of Cross Laminated Timber, which is exposed internally, creating a calm environment for the children.

The nursery features large playrooms spilling out into landscaped gardens, raised mezzanine play areas below large rooflights above and many additional activity areas such as a children's kitchen, dedicated art spaces and a multi-purpose music/dance activity room. The nursery has a low carbon foot print and has achieved a BREEAM 'Excellent' at Design Stage.

The annual Scottish Design Awards, now in their 18th year, aim to reward architecture firms and design agencies in Scotland for their contribution to the country's best design and architecture projects. 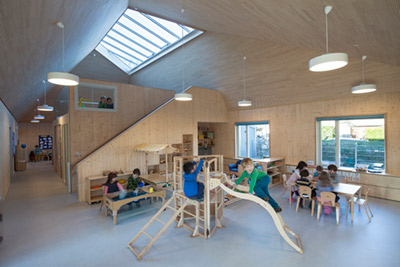 "The new Arcadia Nursery building is a welcome and innovative addition to the University's established and growing portfolio of buildings. It is great to see the nursery pick up this prestigious award, and gain recognition for its contemporary structure and architectural excellence."